How much is the average rent in Virginia Beach, VA?

How to search for apartments for rent in Virginia Beach, VA?

How to find Virginia Beach, VA apartments for rent I can afford?

On Point2, you can search for apartment rentals in Virginia Beach, VA based on your budget. Sort all condos according to price, or get a tailored list of properties by setting the minimum and maximum monthly rates you're comfortable with. Moreover, you can use the Price Drop filter to look for any recent rent declines on the Virginia Beach, VA rental market.

Point2 offers a lot of information about rentals in Virginia Beach, VA, from property type, square footage and amenities to area demographics and even local rent trends. Additionally, you can use the map view to check if the apartments you're looking at are close to the facilities and services you need. The name and contact details of the real estate agents handling the condos are available on all listings, so just reach out to them directly through the contact forms provided.
Renter’s City Guide to Virginia Beach, VA
Introducing Virginia Beach Expenses & Housing Stats Jobs & Education Lifestyle & Renting Tips

The coastal community of Virginia Beach lies in southeastern Virginia by the Atlantic Ocean. Famous for being a beach getaway destination, it is also known as the most populous city in the state of Virginia. It’s popular among suburban families due to its livability, strong health and education systems, as well as its relatively low tax rates.

How is Virginia Beach ranked?

Virginia Beach has received a number of accolades, with popular publications such as Travel+Leisure ranking it #14 among America’s Favorite Cities in 2016. The city has also been named one of the most business-friendly cities, best cities for the outdoors, best cities to raise a family in and best cities to live in the U.S.

How far is Virginia Beach from other cities?

The city is a four-hour drive or one-hour flight from the nation’s capital, Washington, D.C. Meanwhile, Norfolk International Airport in Norfolk, Va., is the closest airport. It’s a 30-minute drive from Virginia Beach.

Virginia Beach has consistently pleasant weather — boasting a balmy, 60°F, on average — and experiences all four seasons. Summers are hot and humid, with the month of July having the highest temperatures (87°F, on average). Because the city lies outside the main storm tracks, it’s a popular summer holiday destination. Winters in the city are generally mild, featuring below-average snowfall (6 inches). January is the coldest month with an average low of 34°F. 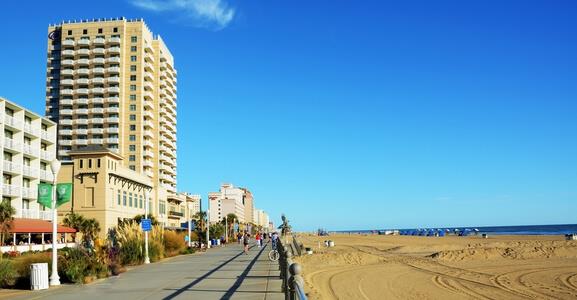 What are the advantages of living in Virginia Beach?

The local boardwalk is one of the city’s finest assets and the city holds the Guinness World Record for “longest stretch of pleasure beach” in the world.

What are the disadvantages of living in Virginia Beach?

The hordes of tourists flocking to Virginia Beach can often be bothersome for locals.

How much does public transportation cost in Virginia Beach?

Local public transportation is assured by a standard bus and light rail, with one-way tickets priced at $3. Discounted fares are available for children under 17, as well as passengers with disabilities and seniors. The VB Wave Shuttle is another budget-friendly transportation option, with tickets priced at $1. Children under 38 inches tall ride for free on most public transit routes in Virginia Beach.

What is the average commute time in Virginia Beach?

The average commute time in Virginia Beach is 23.7 minutes, which is lower than the national average of 26.4 minutes.

How much does a meal cost in Virginia Beach?

A three-course meal for two at an inexpensive restaurant in Virginia Beach costs $60, on average, while a regular cappuccino goes for $4.25.

How much do utilities cost in Virginia Beach?

The average rent for an apartment in Virginia Beach is $1,492 per month.

What is the average apartment size in Virginia Beach?

The average apartment size in Virginia Beach is 973 sq. ft.

What is the rent for a 1-bedroom apartment in Virginia Beach?

Rent for a 1-bedroom apartment in Virginia Beach ranges between $900 and $2,766 per month.

What is the rent for a 2-bedroom apartment in Virginia Beach?

Rent for a 2-bedroom apartment in Virginia Beach ranges between $875 and $3,063 per month.

What is the rent for a 3-bedroom apartment in Virginia Beach?

Rent for a 3-bedroom apartment in Virginia Beach ranges between $999 and $3,799 per month. 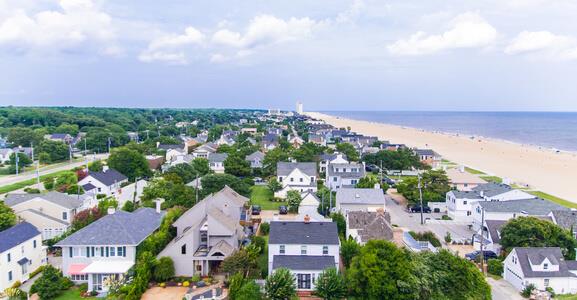 What is the top industry in Virginia Beach?

Tourism is a critical industry in Virginia Beach, with the city welcoming around 13 million tourists each year. Almost 15,000 people work in the tourism sector, which includes restaurants, hotels, retail developments and the entertainment industry. Tourism contributes more than $1 billion to the city’s economy, with ecotourism making up the bulk of the tourism sector, as many local businesses offer land and water tours of the area’s wildlife. In 2005, the Virginia Beach Convention Center opened its doors, catering to large events and group meetings and hosting more than 500,000 guests each year. In addition to the tourism industry, the agribusiness sector is also thriving in the city, adding $80 million in revenue to the local economy and featuring more than 150 farms.

Where to work in Virginia Beach?

The U.S. Navy’s NAS Oceana is the largest employer in Virginia Beach, with the Training Support Center Hampton Roads and the Cape Henry Joint Expeditionary Base East being the other two important military bases. The Navy Exchange Service Command, VT Group and GEICO are some of the city’s leading employers, while Amerigroup, the Christian Broadcasting Network and the American headquarters of Stihl are other major companies based in Virginia Beach. 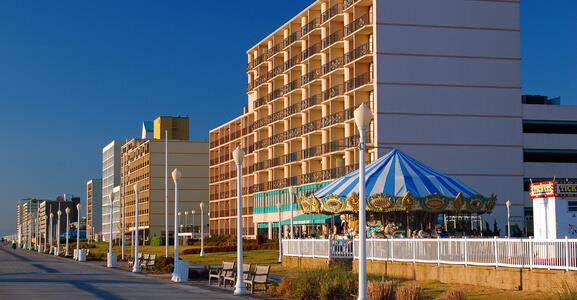 What schools are there in Virginia Beach?

The city’s public school system is one of the largest in the state and serves more than 70,000 K-12 students in more than 55 elementary schools, 15 middle schools and 12 high schools. Green Run Collegiate is an International Baccalaureate World School and is also the only public charter school in the district. The city is also served by secondary schools that feature a wide variety of specialties, including the visual and performing arts, health sciences, technology and engineering. Private schools are also common, as the city is home to schools affiliated with Jewish and Catholic faiths.

What are the top colleges in Virginia Beach?

There are two large private universities located in Virginia Beach. Atlantic University focuses on distance learning and continuing education, and can also be associated with the Association for Research and Enlightenment. Regent University is another prominent higher educational institution that was founded by evangelist Pat Robertson. The city is home to the satellite campuses of the University of Virginia and Virginia Tech. The neighboring city of Norfolk hosts three universities: Old Dominion University, Norfolk State University and Virginia Wesleyan College. 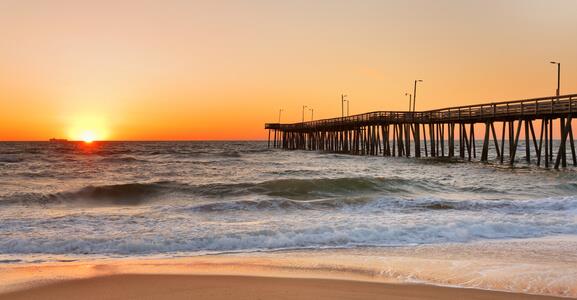 What is the top attraction in Virginia Beach?

What outdoor attractions are there in Virginia Beach?

Lovers of the great outdoors will definitely enjoy the 200 parks and green spaces that can be found in the city. Mount Trashmore Park — the highest point in the city — covers 165 acres; features two lakes and a skate park; and is one of the most popular destinations in Virginia Beach. First Landing State Park is another visitor favorite, featuring an abundance of nature tours, hiking trails and camping facilities.

What family attractions are there in Virginia Beach?

The 9,000-acre freshwater refuge called the Back Bay National Wildlife Refuge is popular amongst families with children. Managed by the U.S. Fish & Wildlife Services, it features a protected habitat for a wide variety of wildlife and also boasts educational programs, scenic trails and gorgeous viewing areas. Ocean Breeze Waterpark is another family favorite, offering more than 30 water slides, rides and even a wave pool.

Where to shop in Virginia Beach?

Lynnhaven Mall offers more than 1 million square feet of retail space, 180 stores and an 18-screen AMC Theatre, making it one of the largest shopping malls on the East Coast.

What are the most popular restaurants in Virginia Beach?

Blue Seafood and Spirits, Waterman’s Surfside Grille and Tautogs Restaurant are some of the most popular eateries in Virginia Beach.

What cultural attractions are there in Virginia Beach?

Cultural attractions are plentiful in Virginia Beach because the city is full of history. One of the best things to do here is to visit the Military Aviation Museum, located at the private-use Virginia Beach Airport, which houses one of the largest private collections of military aircrafts from the two World Wars. The exhibits were all expertly restored to flying condition. The Naval Aviation Monument and the Old Coast Guard Station in Virginia Beach are two other highlights that are bound to provide ample entertainment for military history buffs.

What are the most famous landmarks in Virginia Beach?

Cape Henry Lighthouse is one of the oldest surviving lighthouses in the U.S. Its construction was authorized by George Washington in 1792 and its functioning was managed by Alexander Hamilton. The iconic landmark is rich in American history because it also lies close to the site of the English settlers’ first U.S. landing point in Jamestown, Va.

What events are there in Virginia Beach?

Neptune Park attracts families and couples alike — thanks to the many free concerts and live bands that play here nearly every evening during the warm summer months. The park is hard to miss as it houses a 34-foot-tall statue of Neptune, which can be seen from the Virginia Beach boardwalk. The Virginia Beach Neptune Festival is a large local event that has been held annually for the past 40 years. It showcases the city’s history and culture through a variety of community programs, as well as recreational, music, and arts and crafts activities. The Neptune Festival Boardwalk Weekend takes place during the last weekend of September. It’s the festival’s flagship event, attracting more than 400,000 visitors per year. This emblematic festival has been named one of the top 20 events in the southeastern part of the country and has been ranked among the top 100 events in North America, enjoying tremendous popularity among locals and tourists alike.

What do you need to know about renting in Virginia Beach?

Local rental laws are regulated by the Virginia Landlord-Tenant Act, which states that tenants cannot charge more than two months’ rent for security deposits. The renter must be notified within 30 days if the landlord plans to withhold rent at the end of the lease. Otherwise, the deposit needs to be returned to the renter within 45 days with an itemized list of any deductions or charges. Each time you pay your rent, the landlord must provide a receipt, even if this isn’t directly stated in your lease and regardless of whether you pay by money order or cash.

Any tenant living in an apartment building; multifamily housing unit where services are shared with others; or single-family home that is one of more than 10 similar properties the landlord rents is under the Landlord-Tenant Act and should be vigilant about the exact terms of the lease.