Apartments for Rent in Tampa, FL

How much is the average rent in Tampa, FL?

How to search for apartments for rent in Tampa, FL?

Your perfect apartment for rent in Tampa, FL is just a few clicks away on Point2. You can look up 1-bedroom, 2-bedroom, 3-bedroom apartments, studio apartments or any other type of rental in Tampa, FL. Just use the filtering options available to find properties according to your needs.

How to find Tampa, FL apartments for rent I can afford?

On Point2, you can search for apartment rentals in Tampa, FL based on your budget. Sort all condos according to price, or get a tailored list of properties by setting the minimum and maximum monthly rates you're comfortable with. Moreover, you can use the Price Drop filter to look for any recent rent declines on the Tampa, FL rental market.

Point2 offers a lot of information about rentals in Tampa, FL, from property type, square footage and amenities to area demographics and even local rent trends. Additionally, you can use the map view to check if the apartments you're looking at are close to the facilities and services you need. The name and contact details of the real estate agents handling the condos are available on all listings, so just reach out to them directly through the contact forms provided.

Tampa is a large natural harbor in Florida, regarded as one of the most vibrant, picturesque places in the U.S. The city is known for its rich history and community-building Riverwalk, which attests to the alluring skyscraper skyline of the city and lies by the banks of Hillsborough River. Tampa is also home to the longest continuous sidewalks in the world, Bayshore Boulevard. In Calusa, a Native American dialect, the word Tampa translates to “sticks of fire.” It is a favored destination among Millennials and the average age in the city is 35+. Tampa International Airport was also ranked the fifth-best airport in the U.S. by Conde Nast Traveler.

Where is Tampa located?

How far is Tampa from other cities?

What is Tampa’s history marked by?

Tampa was known for its busy harbor, seascape and rail service, which connected Midwest manufacturers to import and export markets in Cuba and brought seasonal travelers to the popular west coast of Florida.

Summer temperatures average in the mid-80s, while winter temperatures are still above 70°F. August experiences the most rainfall (7.5 inches), while the driest month is November (1.62 inches). 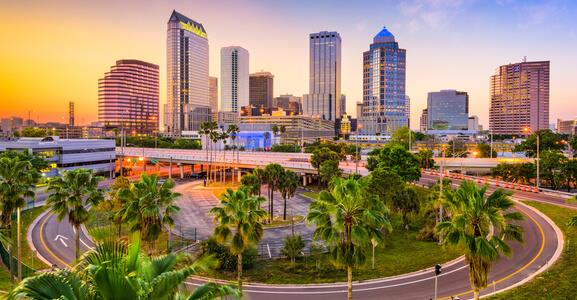 What are the pros of living in Tampa?

The fantastic weather, strengthening economy, technology and amazing culture are some of the biggest advantages to living in Tampa. The city is also known for being clean, and seamlessly binds together the best of what festivals, sports, music, art and stage have to offer. It’s home to the largest of several recognized healthcare institutions, including Tampa General Hospital, which is also one of the leading transplant centers in the country. Tampa is also considered to be among the top 10 American cities for Millennials.

What are the cons of living in Tampa?

The rapid growth of the city has triggered challenges in traffic and parking, so water taxis have become a popular option. 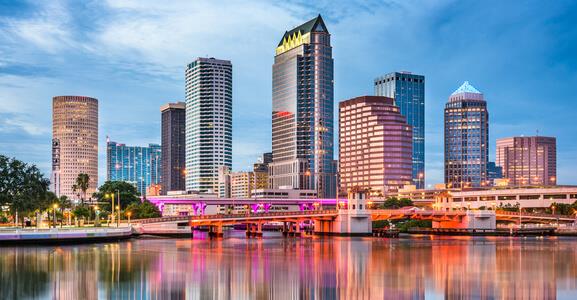 Is living in Tampa expensive?

Consumer prices in the city are 1.86% lower than in Dallas, including rent. The cost of living in Tampa costs 9.6% less than other U.S. metropolitan cities, on average.

What is the best way to get around Tampa?

Public transportation is quite inexpensive here, with a single bus ticket costing $2, while locals pay $65 for a monthly pass. The city of Tampa is also served by a trolley service.

How much does a meal cost in Tampa?

Tampa has a fine dining culture with quite affordable prices. A three-course meal for two costs $51.50 and a single meal in an inexpensive restaurant costs $14.45, while a regular cappuccino costs around $3.67, on average.

How much do utilities cost in Tampa?

Basic utilities cost $154.34, on average, for a 915-square-foot apartment, while residents pay about $57.36 for internet services.

The average rent for an apartment in Tampa is $1,915 per month.

What is the average apartment size in Tampa?

The average apartment size in Tampa is 927 sq. ft.

What is the rent for a studio apartment in Tampa?

What is the rent for a 1-bedroom apartment in Tampa?

What is the rent for a 2-bedroom apartment in Tampa?

What is the rent for a 3-bedroom apartment in Tampa? 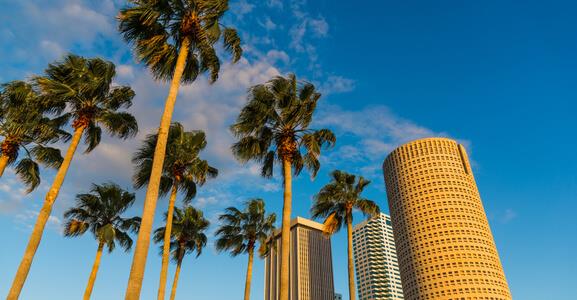 Where to work in Tampa?

Tampa is home to a number of Fortune 1000 companies. MacDill Air Force Base, TECO Energy and Raymond James Financial are some of the largest employers in the city, in addition to numerous healthcare providers. The average commute time is 24 minutes — lower than the national average — which ensures that employers have fluid access to their jobs.

Tampa is experiencing economic growth and an increase in employment opportunities, thanks to its leading position in financial research, information services and the recent burst of local technology startups. The ongoing construction work of brand new skyscrapers for residential and commercial occupants also continues to benefit the local economy. 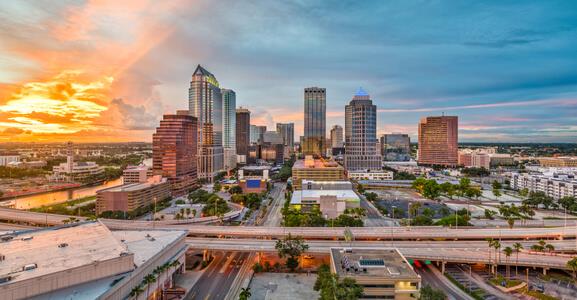 What are the top colleges in Tampa? 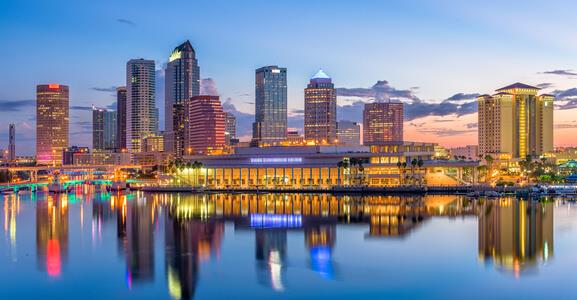 Tampa offers plenty of amazing attractions, including the Riverwalk, Channelside, Harbor Island, Davis Island and downtown Tampa. Interactive children’s museums, the Florida Aquarium, the Straz Theater, Lawry Park Zoo and Busch Gardens offer entertainment for individuals of all ages. Meanwhile, the Davis Island Yacht Club and the Tampa Yacht Club feature strong sailing cultures, while Rock the Park is one of the best free attractions in Riverside. The city is also recognized as a leading birding site, featuring breeding populations between 35,000 and 45,000 nesting pairs.

What cultural activities are there in Tampa?

Cultural activities in Tampa are plentiful, including museums, science fairs and music venues. Amalie Arena, the USF Sun Dome and the Tampa Convention Center host a wide range of events throughout the year. The world-famous singer Ray Charles actually began his career playing gigs in Tampa.

Is Tampa a city of sports?

Tampa is home to the NHL’s Tampa Bay Lightning, NFL’s Tampa Bay Buccaneers and MLB’s Tampa Bay Rays, while the New York Yankees spring training garners support from an avid fan base. Amalie Arena and Raymond James Stadium are some of the top venues in the city. Local residents also support arena football and professional soccer. The University of South Florida and Tampa University also have excellent facilities and enjoy local support. And, the Hillsborough River is frequented for boating activities.

What restaurants are there in Tampa?

Those with a penchant for fine Italian food should check out the Osteria Natalina in South Tampa, while those in search of delicious Caribbean food should visit Bahama Breeze Island Grille, which serves conch fritters, tacos, lobster and shrimp quesadillas, as well as other delicacies.

What events are held in Tampa?

The costume-carnival-like Gasparilla Pirate Invasion is an annual two-week event and features a restored pirate ship, thousands of boats and two parades. The Outback Bowl at Raymond James Stadium, Plant City’s Winter Strawberry Festival, the Gasparilla Art Festival and the Gasparilla Music Festival are other prominent events hosted by the city.

What parks are there in Tampa?

Parque Amigos de Jose Marti in Ybor City — which is technically owned by Cuba — has an interesting history because it was once home to 12,000 cigar makers and known as the cigar capital in the world. The Riverwalk features numerous parks, while the popular South Tampa destination, Davis Island, has one of the top Little League facilities in the U.S. Ballast Point Park also has boat launches and playgrounds, and Al Lopez Park — located near Raymond James Stadium — boasts ballparks and picnic tables, along with jogging, biking and walking trails.

Where to shop in Tampa?

Tampa is a shopper’s paradise. It’s home to the tree-lined Hype Park and WestShore, which attract shoppers from all parts of the state and beyond. International Mall features distinctive retail opportunities. Tampa is also known for its fabulous inland and waterside hotels, some of which are located in downtown and can be accessed from the Riverwalk.

What to know about renting in Tampa?

The Florida Residential Landlord Act protects Tampa tenants and takes precedence over language in the lease. Those interested in renting a place will find seasonal, monthly and weekly rentals in the city.