Apartments for Rent in Charlotte, NC

See all agents in Charlotte, NC

How much is the average rent in Charlotte, NC?

How to search for apartments for rent in Charlotte, NC?

Your perfect apartment for rent in Charlotte, NC is just a few clicks away on Point2. You can look up 1-bedroom, 2-bedroom, 3-bedroom apartments, studio apartments or any other type of rental in Charlotte, NC. Just use the filtering options available to find properties according to your needs.

How to find Charlotte, NC apartments for rent I can afford?

On Point2, you can search for apartment rentals in Charlotte, NC based on your budget. Sort all condos according to price, or get a tailored list of properties by setting the minimum and maximum monthly rates you're comfortable with. Moreover, you can use the Price Drop filter to look for any recent rent declines on the Charlotte, NC rental market.

Point2 offers a lot of information about rentals in Charlotte, NC, from property type, square footage and amenities to area demographics and even local rent trends. Additionally, you can use the map view to check if the apartments you're looking at are close to the facilities and services you need. The name and contact details of the real estate agents handling the condos are available on all listings, so just reach out to them directly through the contact forms provided.

Often referred to as the Queen City by residents, Charlotte is the largest city in the state of North Carolina. It’s known for its unique blend of big-city skyline and small-town feel. It’s also the home of the NASCAR Hall of Fame and Bank of America.

How big is Charlotte compared to other cities?

Experiencing continuous growth since the 1990s, Charlotte’s metropolitan area is home to more than 800,000 people. This is nearly twice the size of the population of Raleigh, the state’s capital, which lies a mere 160 miles to the northeast.

How far is Charlotte from other cities?

Greensboro — the third-largest city in North Carolina — lies 90 miles from Charlotte, while Atlanta is 244 miles away. Williamsburg, Va., is 335 miles’ distance, which is about a five-hour drive. Myrtle Beach, the charming beach destination, is a 3.5-hour ride away (175 miles).

Charlotte is one of the sunniest places in the U.S., experiencing 214 sunny days, on average — ideal for those looking for outdoor fun. The weather is generally mild in most seasons, except for the summer months, when it can get quite hot and humid. 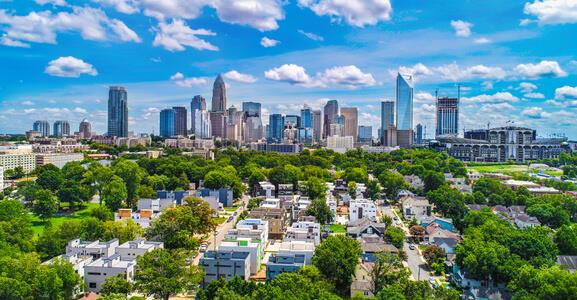 What are the advantages of living in Charlotte?

The restaurant scene is one of Charlotte’s finest assets, as the city is home to high-end eateries like Bentley’s Restaurant; Morton’s Steakhouse; the Bonterra Dining and Wine Room; Mildwood Smokehouse; and Tupelo Honey Cafe.

What are the disadvantages of living in Charlotte?

Parking can prove to be a bit of an issue here, as street parking is usually hard to come by and the myriad of parking garages available in the downtown core are either too expensive or offer only private parking.

Is Charlotte a diverse city?

Charlotte ranks among the top 10 most diverse cities in the country and is a cultural melting pot for both people and food. 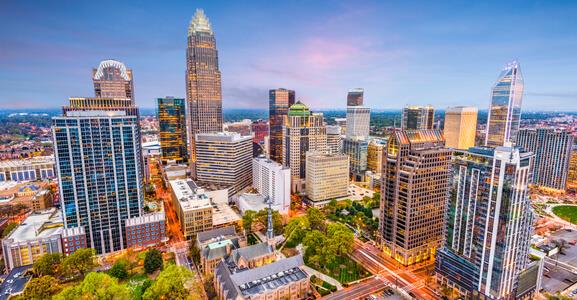 Living in Charlotte is relatively inexpensive when compared to other major U.S. cities.

How much do utilities cost in Charlotte?

Basic utilities (including heating, water, cooling, electricity and garbage) cost around $156.52, on average, for a 915-square-foot apartment, which is just below the national average of $159.63.

How much does a meal cost in Charlotte?

A typical three-course meal for two at a mid-range restaurant is priced at $66, on average.

What is the best way to get around Charlotte?

With a fast and reliable public transportation system, the city of Charlotte offers public bus lines that cover the metro area, along with a light rail system covering the larger areas of the city. A one-way light rail ticket will set you back $2.20, while a one-day unlimited pass costs $6.60.

What is the average rent in Charlotte?

The average rent for an apartment in Charlotte is $1,301 per month.

What is the average apartment size in Charlotte?

The average apartment size in Charlotte is 941 sq. ft.

What is the rent for a studio apartment in Charlotte?

Rent for a studio apartment in Charlotte ranges between $1 and $3,553 per month.

What is the rent for a 1-bedroom apartment in Charlotte?

What is the rent for a 2-bedroom apartment in Charlotte?

What is the rent for a 3-bedroom apartment in Charlotte? 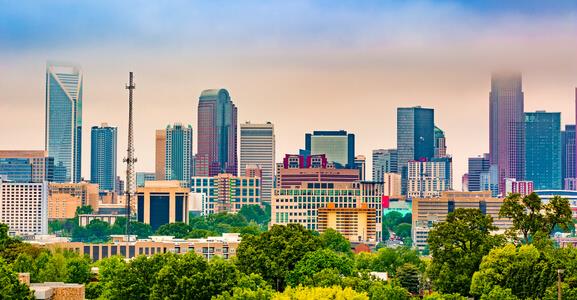 Where to work in Charlotte?

The city is filled with a myriad of professional companies within the banking, finance, and accounting industries and features some of the best-paying jobs in the country. Bank of America is the largest bank headquartered in Charlotte, but is just one of seven Fortune 500 companies based in the city. The others are Lowe’s, Nucor, Duke Energy, Sonic Automotive, Family Dollar and Domtar. The unemployment rate in Charlotte is 3.9%, which is below the national average of 4.4%. 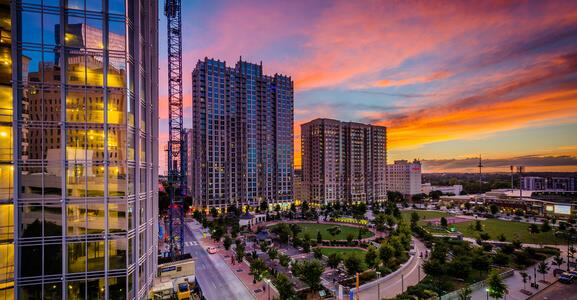 What are the top colleges in Charlotte?

Several high-profile universities serve the city of Charlotte, including Johnson and Wales; Queens College; Wake Forest at Charlotte; Johnson C. Smith; University of North Carolina at Charlotte; and the Charlotte School of Law. UNC Charlotte is the fourth-largest institution of the 16 within the University of North Carolina system, and is also the largest institution in the Charlotte region, offering a wide range of bachelor, master and doctoral degrees. UNC Charlotte also features seven professional colleges, which include Liberal Arts and Sciences; Arts + Architecture; Business; Computing and Informatics; Education; Engineering; and Health & Human Services; featuring a diverse group of schools in multiple different fields and industries. 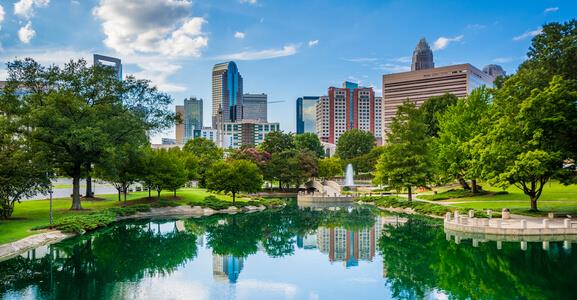 What main events are there in Charlotte?

Some of the most popular events in the city are the Taste of Charlotte (in summer) and Restaurant Week (in the fall), when visitors can try some tasty local delicacies at affordable prices.

What sporting events are there in Charlotte?

The NBA’s Charlotte Hornets play their games at the Time Warner Cable Arena, while the NFL’s Carolina Panthers play in the nearby Bank of America Stadium. The Charlotte Knights — affiliates of the Chicago White Sox — play their games in the scenic BB&T Ballpark uptown.

What family attractions are there in Charlotte?

King Drive Art Walk is a fantastic event for families with children, offering fun and memorable times with lots of food, music, games and art.

What parks are there in Charlotte?

With more than 210 public parks governing the city, there are plenty of cool outdoor areas for a good spot to walk the dog or take the kids to play. The 98-acre Freedom Park hosts the annual Festival in the Park every September. Reedy Creek Park, Winget Park, James Boyce Park and Nevin Community Park are other great places worth checking out.

The Epicentre is one of the city’s nightlife hotspots in the heart of uptown, which you can reach via the light rail or by ridesharing services, such as Uber or Lyft. The Epicentre is known for its hip restaurants and bars — like the Whisky River and Howl at the Moon — and is also famous for its full-sized movie theater, making it a fantastic place that adults and couples can enjoy. The NoDa area on North Davidson and the Montford area off Woodlawn are other popular nightlife spots in the city. The Fillmore Charlotte, which opened its gates in 2009, is another great place to enjoy in the heart of the NC Music Factory entertainment complex (recently renamed AvidXchange Music Factory).

Where to shop in Charlotte?

South Park Mall is a great destination for shopping fanatics, boasting high-end designer stores like Coach, Louis Vuitton and Michael Kors. Northlake Mall and Ayrsley Village are two other popular shopping and entertainment venues in the city, with the former featuring more than 100 stores and the latter serving as home to several bars and restaurants, along with the Regal Cinemas Movie Theater.

What to know about renting in Charlotte?

Rental laws are similar to those governing other states, but differ in the fact that North Carolina has exact requirements for eviction notices (as long as the notice length is not specifically stated in the lease). The eviction period is seven days for monthly rentals, while the minimum eviction notice is 30 days for year-to-year rentals and 60 days for mobile homes.