How much is the average rent in New Orleans, LA?

How to search for apartments for rent in New Orleans, LA?

Your perfect apartment for rent in New Orleans, LA is just a few clicks away on Point2. You can look up 1-bedroom, 2-bedroom, 3-bedroom apartments, studio apartments or any other type of rental in New Orleans, LA. Just use the filtering options available to find properties according to your needs.

How to find New Orleans, LA apartments for rent I can afford?

On Point2, you can search for apartment rentals in New Orleans, LA based on your budget. Sort all condos according to price, or get a tailored list of properties by setting the minimum and maximum monthly rates you're comfortable with. Moreover, you can use the Price Drop filter to look for any recent rent declines on the New Orleans, LA rental market.

Point2 offers a lot of information about rentals in New Orleans, LA, from property type, square footage and amenities to area demographics and even local rent trends. Additionally, you can use the map view to check if the apartments you're looking at are close to the facilities and services you need. The name and contact details of the real estate agents handling the condos are available on all listings, so just reach out to them directly through the contact forms provided.
Renter’s City Guide to New Orleans, LA
Introducing New Orleans Expenses & Housing Stats Jobs & Education Lifestyle & Renting Tips

Overlooking the Mississippi River, New Orleans is famous for its jazz scene, laid-back, party lifestyle and Mardi Gras celebration. it is among the top 20 largest cities in the country and has an international reputation as a U.S. port, enjoying easy access to the Gulf of Mexico, which is situated about 100 miles south of the river. New Orleans also has a reputation for being one of the best cities for young entrepreneurs. In fact, it’s been named #1 in the country for its number of bars per capita, top travel destination for sports enthusiasts, and best city for single people.

Where is New Orleans located?

The city lies 80 miles from Baton Rouge, the capital of Louisiana, which is approximately a 90-minute drive along I-10. Atlanta can be reached in about 7 hours via mainly interstate roads, while Houston is a five-hour drive away (350 miles).

How big is New Orleans?

New Orleans is the largest city in Louisiana, followed by the capital city, Baton Rouge, and Shreveport. The city of Birmingham, Ala., has similar demographics. However, New Orleans has 1.5 times its population.

Due to its southern location, New Orleans has a subtropical, humid climate with short winters that don’t get much precipitation. It experiences average temperatures of 50°F. The summer months are wet and rainy, with average temperatures hovering around 83°F. Autumn sees less rain, and the mildest weather occurs in spring — just in time for the famous Mardi Gras celebration. 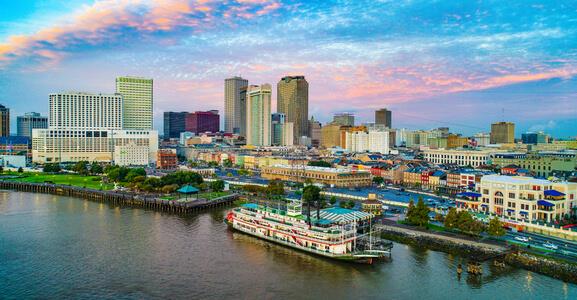 What are the advantages of living in New Orleans?

Thanks to its long-standing reputation as a global cultural capital, New Orleans has been home to Spanish, French and African individuals, resulting in a multicultural cuisine, as well as diverse festivals and parades. The city is known as being the birthplace of jazz music and is famous for its Mardi Gras celebrations, top-rated jazz clubs, varied restaurant scene, late night bars of the French Quarter and fun dance clubs on Bourbon Street.

What are the disadvantages of living in New Orleans?

On the flip side, the abundance of tourists can be bothersome, and the humidity of late August and September makes the temperatures feel scorching hot. And, although tropical storms and hurricanes are unlikely to hit, the city has taken measures to improve the evacuation process just in case. 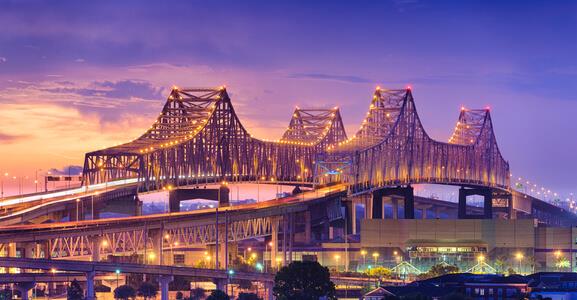 How much does a meal cost in New Orleans?

Eating in New Orleans is relatively cheap, with an average meal in an inexpensive restaurant costing around $16.50, while a three-course meal for two at a mid-range restaurant has the average price of $60.

How much do utilities cost in New Orleans?

How to get around New Orleans?

The Regional Transit Authority ensures public transportation in the city in the form of an interconnected network of large buses and charming streetcars covering all major parts of New Orleans, with one-way tickets costing as little as $1.25. Cab companies are also abundant in the city and taxis are easy to find. The average commute time in the city is 23.8 minutes, which is lower than the national average.

The average rent for an apartment in New Orleans is $1,279 per month.

What is the average apartment size in New Orleans?

The average apartment size in New Orleans is 893 sq. ft.

What is the rent for a studio apartment in New Orleans?

What is the rent for a 1-bedroom apartment in New Orleans?

What is the rent for a 2-bedroom apartment in New Orleans?

What is the rent for a 3-bedroom apartment in New Orleans? 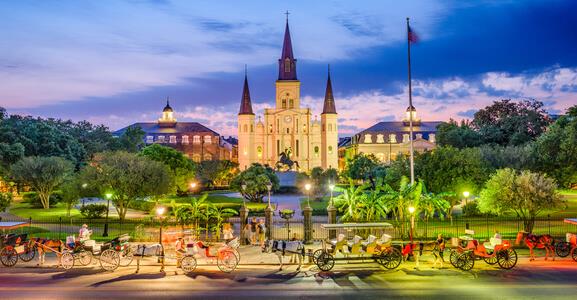 What are the major industries in New Orleans?

Tourism is one of the largest components of the local economy, with nearly half of the city’s tax revenue originating from tourism-related industries, such as transportation services, convention events and hospitality. Logistics, shipping and commodities also make up a large bulk of New Orleans’ economy, thanks to its position as a key port city. Oil rigging also offers ample employment, due to the city’s proximity to the Gulf of Mexico. Entergy — the Fortune 500 company that specializes in nuclear power plant operations and power generation — also has a base in the city.

What are the top colleges in New Orleans? 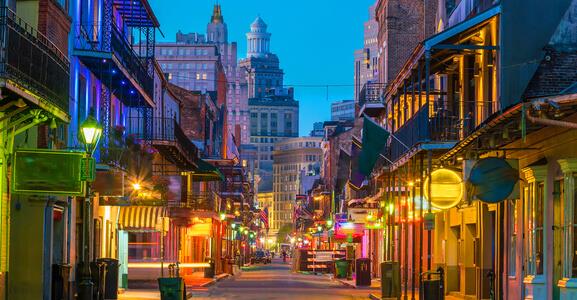 What parks are there in New Orleans?

New Orleans is home to gorgeous City Park — ranked among the 10 most-visited urban parks in the country — which houses the world’s largest collection of live oak trees, including the renowned Dueling Oaks.

Where to shop in New Orleans?

The Outlet Collection and Riverwalk are the most popular shopping areas in the city, featuring more than 70 brand-name stores.

What family attractions are there in New Orleans?

The Superdome is one of the most popular venues in the city, hosting a number of prestigious concerts yearly and serving as home to the New Orleans Saints football team. Smoothie King Center is similarly popular for family-friendly events and hosts the New Orleans Pelicans basketball team.

What cultural attractions are there in New Orleans?

What events are there in New Orleans?

Mardi Gras is the most famous event and is held in early March annually. It lasts about two weeks and features parades of costumed marchers. The New Orleans Jazz & Heritage Festival is another prominent annual event, celebrating the origins of jazz music and culture.

What to know about renting in New Orleans?

In New Orleans, the rental environment enables tenants to have less leverage than landlords. A 10-day notice by the landlord is enough to evict month-to-month renters, while violating lease conditions or failing to pay rent requires merely five days’ notice. Renters insurance is a necessity in New Orleans due to the city’s susceptibility to hurricanes and major storms. The lease may be terminated if a rented facility is damaged from weather-related events.