Apartments for Rent in Chicago, IL

How much is the average rent in Chicago, IL?

How to search for apartments for rent in Chicago, IL?

Your perfect apartment for rent in Chicago, IL is just a few clicks away on Point2. You can look up 1-bedroom, 2-bedroom, 3-bedroom apartments, studio apartments or any other type of rental in Chicago, IL. Just use the filtering options available to find properties according to your needs.

How to find Chicago, IL apartments for rent I can afford?

On Point2, you can search for apartment rentals in Chicago, IL based on your budget. Sort all condos according to price, or get a tailored list of properties by setting the minimum and maximum monthly rates you're comfortable with. Moreover, you can use the Price Drop filter to look for any recent rent declines on the Chicago, IL rental market.

Point2 offers a lot of information about rentals in Chicago, IL, from property type, square footage and amenities to area demographics and even local rent trends. Additionally, you can use the map view to check if the apartments you're looking at are close to the facilities and services you need. The name and contact details of the real estate agents handling the condos are available on all listings, so just reach out to them directly through the contact forms provided.

Chicago is known for its outstanding location on the shores of the Great Lakes, making it the biggest city on the largest body of fresh water in the world. Its geographical position in the country has also transformed it into a major transportation hub, both in terms of its port and railroads, as well as its airport, which is the second busiest in the U.S.

How big is Chicago?

With a population of around 2,718,000 residents, Chicago is the third-largest city in the United States, after New York and Los Angeles.

Chicago has a temperate climate. Its proximity to the Great Lakes can result in unpredictable weather at times, yet the city sees a balanced amount of rain and sunshine throughout the year. 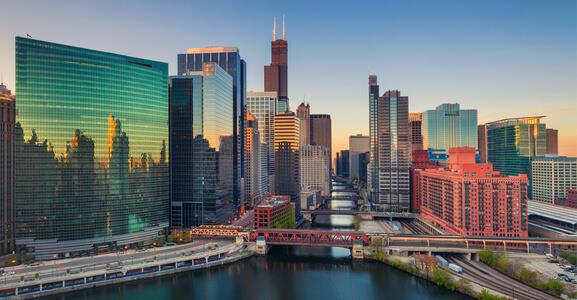 What are the pros of living in Chicago?

Living next to the Great Lakes is one of the main pros of living in Chicago. The city's shoreline parks, beaches and trails offer numerous free outdoor activities for nature lovers, as well as access to fresh, clean drinking water that tastes just as good on tap. Those who love sports are also spoiled for choice, and Chicago has both amateur and professional sports teams. You can go watch the Chicago Blackhawks hockey team, Chicago Bulls (the home of Michael Jordan), catch a game of soccer with Chicago Bears or see the Chicago Cubs and Chicago White Sox if you're into baseball. And after the game, you can enjoy the city's diverse cuisine in one of its many restaurants.

What are the cons of living in Chicago?

When living in the Windy City, the weather can be unpredictable, but even a rain or snow shower can turn into sunshine in a few hours.

Is Chicago a diverse city?

Few cities have a population as diverse as Chicago's. Over 500,000 of the city's residents are foreign-born immigrants, with more Mexicans living in Chicago than anywhere else in the U.S. and the highest population in the world of Poles living outside Warsaw. 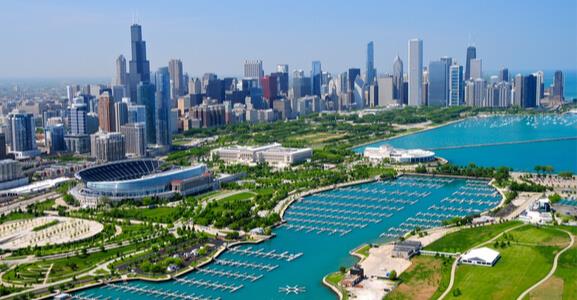 Is Chicago an expensive city?

The cost of living in Chicago is lower than other large cities in the U.S. and around 30% lower than in New York. The figures are similar to the national averages.

How much is public transportation in Chicago?

Busses will cost you $2 to ride, and a train ticket within the city is $2.50. Chicago has one of the best public transport systems in the country, and the costs will reduce further if you buy a day or month pass.

How much does it cost to get from Chicago to New York?

If you prefer to take the train, Amtrak offers fair prices for coach seats, with costs ranging from $106 to $134 per person. For those who prefer making the 800 miles journey by car, getting from Chicago to New York will take about 12 hours, depending on traffic.

How much is a taxi in Chicago?

Chicago has several taxi-hailing options, and you can call a taxicab off the street or use your phone app for an Uber. The city regulates and sets the rates for cabs, so prices are the same regardless of the provider you use. However, Uber prices may vary depending on the type of car and the route selected, although they are still some of the lowest in the country.

How much are utilities in Chicago?

The monthly utility bills for a 900 sq ft apartment in Chicago are around $135. Internet services will add around another $70 and there are three providers to choose from: Comcast, AT&T and RCN.

The average rent for an apartment in Chicago is $2,080 per month.

What is the average apartment size in Chicago?

The average apartment size in Chicago is 750 sq. ft.

What is the rent for a studio apartment in Chicago?

Rent for a studio apartment in Chicago ranges between $45 and $9,522 per month.

What is the rent for a 1-bedroom apartment in Chicago?

What is the rent for a 2-bedroom apartment in Chicago?

What is the rent for a 3-bedroom apartment in Chicago? 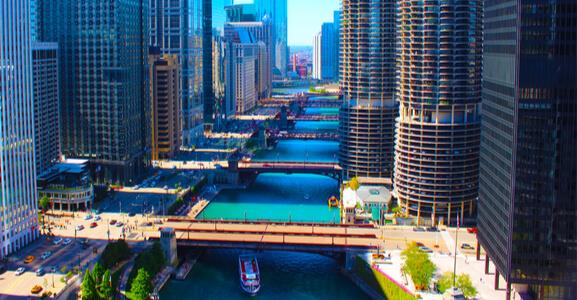 What are the major industries in Chicago?

Chicago has a diverse economy, providing ample job opportunities and also contributing to the low unemployment rate. Some of the city's main industries are banking and finance, the medical sector and the software industry is also picking up. Chicago's workforce is highly educated due to the city providing some of the best schools and universities in the country.

What are the top employers in Chicago?

Some of Chicago's top employers are in the finance industry, with every major U.S. bank and several international banks having a branch in the city. The Chicago Mercantile Exchange was founded in the 19th century and is now the world's largest exchange in the world for options and futures. The medical industry is another top employer, with numerous major hospitals and research facilities. Chicago has been dubbed 'Silicon Prairie' due to the large number of start-ups in the software industry, but global companies such as Microsoft, Google and Intel also call it home. 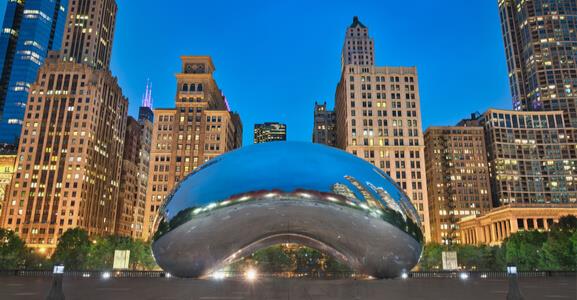 How many public schools are there in Chicago?

With over 600 schools and 400,000 children enrolling each year, the Chicago Public Schools is the third-largest school district in the United States.

What are the top colleges in Chicago? 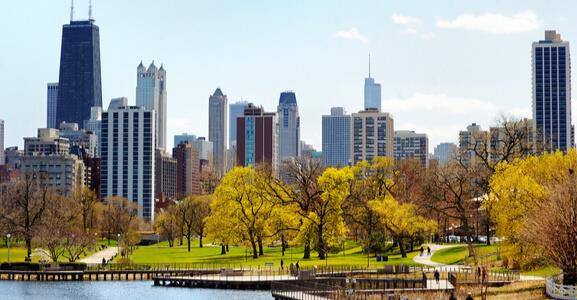 What are the main attractions in Chicago?

From watching a sports game at the Wrigley Field to visiting Navy Pier, there's always something to do in Chicago. Check out the Hancock Center and the Willis Tower, two iconic buildings that offer a panoramic view of the city. Visiting Lincoln Park Zoo is a fun, free activity for the whole family. Home to over 1,000 animals from over 200 species, the zoo is also one of the oldest and largest in the U.S.

What are the main annual events in Chicago?

Chicago hosts several nationally acclaimed festivals each year, ranging from large art fairs to neighborhood festivals. The Chicago Jazz Festival showcases world-class musicians, while the Gay Pride Parade and weekend festivals are an international staple for the LGBT community. The Chicago Air and Water Show is a stunning display of aviator skills, and for food lovers, Taste of Chicago puts some of the city's finest restaurants on the stage.

What museums should you visit in Chicago?

Chicago is known around the world for its cultural institutions. Top picks include the Museum of Science and Industry, the Art Institute of Chicago, the Field Museum of Natural History and the Chicago Symphony.

What parks are there in Chicago?

With one of the most extensive parks' systems in the U.S., outdoors lovers have much to pick from. The city's largest park, occupying 5 miles along the northern lakefront, is Lincoln Park, providing dozens of beaches. Grant Park, which includes Millennium Park and the Pritzker Music Pavilion, is located in downtown Chicago and was designed by the world-renowned architect Richard Gehry. Down on the south lakefront is Jackson Park, by Frederick Law Olmsted, the father of landscape architects. Stretching along 500 acres, the park was home to Chicago's 1893 World's Fair. Another popular area is Humboldt Park, the only one in the city that's not on the lakefront and spanning across 200 acres on Chicago's northwest side.

Where to go shopping in Chicago?

Navy Pier is not only one of Chicago's top attractions but also a hub of entertainment, offering a carousel, a theater, boat rides, a children's museum, as well as shops and restaurants. The most popular street in Chicago is the Magnificent Mile — Michigan Avenue, home to the spectacular Water Tower Place shopping center. The Chicago Ridge Mall in Oak Lawn is another excellent shopping spot, including a food court and a movie theater.

What is there to do in Chicago at night?

Chicago's entertainment venues are just as diverse as its residents, and some of the best places to enjoy the vibrant nightlife are in the ethnic neighborhoods. Head down to Little Village if you want to be immersed in the city's Mexican culture or to Chicago's West Ridge for the Indian community. For a taste of Asia, take a stroll through Chinatown or explore the Korean culture in the Albany Park neighborhood.

What are my rights as a tenant in Chicago?

Chicago's renter's rights bill, or the Chicago Residential Landlord Tenant Ordinance, is one of the most encompassing in the U.S. It was originally passed over a century ago and last updated in 2010, so if you're looking to rent in Chicago, make sure to review it before signing any lease agreement. The bill covers tenants' rights in terms of timely repairs, access to services such as heat, water and electricity, as well as protection against landlord retaliation. It also stipulates sufficient notice of lease termination, 48-hour notification for apartment entry, interest on the security deposit and its timely return.