Apartments for Rent in Jacksonville, FL

How much is the average rent in Jacksonville, FL?

How to search for apartments for rent in Jacksonville, FL?

Your perfect apartment for rent in Jacksonville, FL is just a few clicks away on Point2. You can look up 1-bedroom, 2-bedroom, 3-bedroom apartments, studio apartments or any other type of rental in Jacksonville, FL. Just use the filtering options available to find properties according to your needs.

How to find Jacksonville, FL apartments for rent I can afford?

On Point2, you can search for apartment rentals in Jacksonville, FL based on your budget. Sort all condos according to price, or get a tailored list of properties by setting the minimum and maximum monthly rates you're comfortable with. Moreover, you can use the Price Drop filter to look for any recent rent declines on the Jacksonville, FL rental market.

Point2 offers a lot of information about rentals in Jacksonville, FL, from property type, square footage and amenities to area demographics and even local rent trends. Additionally, you can use the map view to check if the apartments you're looking at are close to the facilities and services you need. The name and contact details of the real estate agents handling the condos are available on all listings, so just reach out to them directly through the contact forms provided.

Nicknamed “The River City,” or just “Jax” by its locals, Jacksonville is a city in northern Florida on the banks of the St. Johns River. Boasting the youngest population in the state of Florida, Jacksonville is a hip, vibrant city with a rich film and music culture. In fact, the city played host to one of Elvis Presley’s first concerts in the historic Florida Theater and also launched the career of other music legends, such as Southern Rock and the Allman Brothers band.

How big is Jacksonville?

Jacksonville is the largest city in Florida by population, and its metropolitan area is the fourth-largest in the state after Miami, Tampa-St. Petersburg and Orlando. With a total land area of 747 square miles, it is also the fifth-largest city in the U.S. by area.

What cities are close to Jacksonville?

Located near the Florida state border, Jacksonville is a little ways from other large metropolitan areas in the state. However, the Jacksonville International Airport provides easy access across the country and beyond, and it also has 27 non-stop destination cities. Orlando is 141 miles south and Tampa is around 200 miles away. If you fancy an out-of-state trip, you can reach Savannah, Ga., in a little more than two hours by car.

Jacksonville has a humid subtropical climate, with hot, wet summers and mild winters. Residents enjoy an average of 221 sunny days per year and an average July temperature of 90°F. Winters here typically drop to 42.5°F in January. 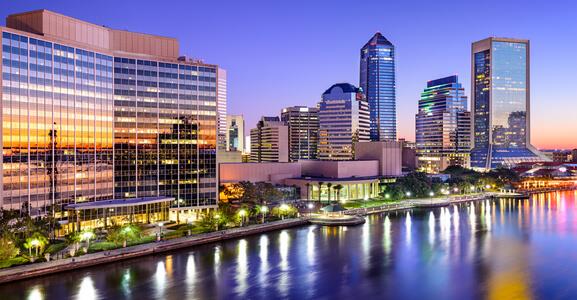 What are the pros of living in Jacksonville?

If you’re looking to live in a city with a young vibe, excellent weather and instant access to the beach, Jacksonville is the perfect place for you. The affordable cost of living; ethnic and cultural diversity; numerous options for employment and higher education; as well as lush nightlife make Jacksonville a very appealing city for both young professionals and families.

What are the cons of living in Jacksonville?

Jacksonville sprawls across a very large area, which is one of the downsides of living here. Locals often have to rely on their cars to get around — which, paired with insufficient public transportation options, makes the city prone to heavy traffic and rush hour congestion. 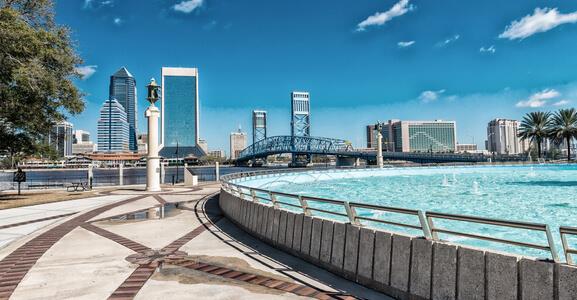 How much is public transportation in Jacksonville?

Public transportation in the city is provided by the Jacksonville Transportation Authority, which has a fleet of 180 buses operating on 56 routes. One-day passes are available for $1.75, or you can opt for a monthly pass at $65. People with disabilities and Medicare card holders benefit from reduced fares, while senior citizens enjoy free rides.

How much does a meal cost in Jacksonville?

The cost of living in Jacksonville is typically lower than the national average and significantly lower than Miami. For example, you and your partner can grab a three-course meal in a mid-range restaurant for around $50. Or, if you prefer dining solo, a meal in an inexpensive restaurant will cost around $18.75.

How much are utilities in Jacksonville?

Monthly utilities for a 915-square-foot apartment in Jacksonville are around $148.19 — lower than the national average of $160.43. Internet services will add another $68.56 to your monthly expenses, depending on the provider.

The average rent for an apartment in Jacksonville is $1,453 per month.

What is the average apartment size in Jacksonville?

The average apartment size in Jacksonville is 965 sq. ft.

What is the rent for a studio apartment in Jacksonville?

Rent for a studio apartment in Jacksonville ranges between $830 and $2,683 per month.

What is the rent for a 1-bedroom apartment in Jacksonville?

Rent for a 1-bedroom apartment in Jacksonville ranges between $855 and $3,807 per month.

What is the rent for a 2-bedroom apartment in Jacksonville?

Rent for a 2-bedroom apartment in Jacksonville ranges between $525 and $6,140 per month.

What is the rent for a 3-bedroom apartment in Jacksonville? 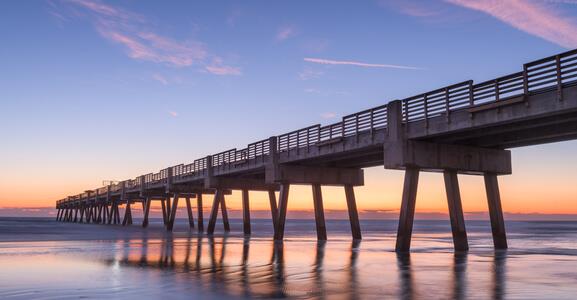 How is the job market in Jacksonville?

Jacksonville has enjoyed steady job growth since the 2008 recession, when the unemployment rate surpassed 10%. It has since stabilized and, by April 2016, unemployment dropped to 4.3% and around 690,000 people in the local workforce had full-time jobs.

What are the top employers in Jacksonville?

Jacksonville has a diverse job market, with employment sectors ranging from healthcare and education to finance and retail. The city is home to four Fortune 500 companies, which also act as its top employers, namely: CSX Corporation, Fidelity National Financial, Fidelity National Information Services and Southeastern Grocers. 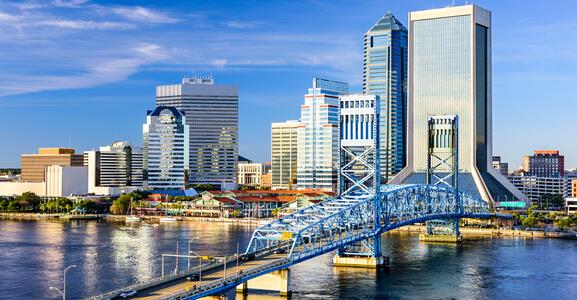 Does Jacksonville have good schools?

Jacksonville is part of the Duval County Public School System, which includes 172 schools from elementary through high school. The city also has several charter and magnet schools, as well as some highly regarded private schools. Although Jacksonville — and the state of Florida as a whole — may have scarcer funds spent on each student, local schools do make a difference for parents and students alike, such as the North Florida School of Special Education.

What are the top colleges in Jacksonville?

If you’re pursuing higher education in Jacksonville, there are several options to choose from. The University of North Florida is one of the best values in the state, with almost 15,000 enrolled each year. Meanwhile, Florida Community College at Jacksonville has more than 25,000 students, while Jacksonville University sees 3,500 students each year. 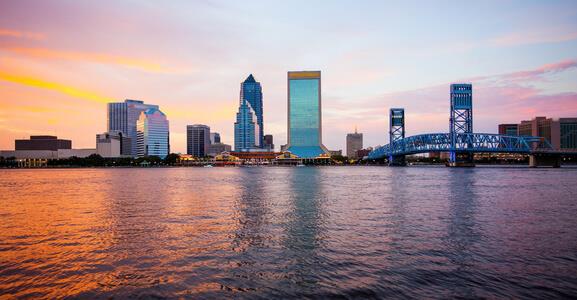 What is there to do in Jacksonville for families?

When it comes to family fun, the Jacksonville Zoo is an absolute must-see, with more than 1 million visitors each year coming to explore the grounds and admire its 2,000 animals. The city’s Riverbank is another popular hangout, spanning along the north and south banks of the St. Johns River and providing an enjoyable promenade into the downtown area. Jacksonville is also the #7 city in the U.S. by number of park playgrounds. So, when in doubt, make sure to check them out. Here, cycling trails plus picnic and play areas are in abundance.

What is there to do in Jacksonville for couples?

The state’s youngest city is alive with entertainment opportunities for couples young and old. For a great night out in Jacksonville, check out The Elbow, a pedestrian-friendly entertainment district that’s home to establishments such as the Hourglass Pub, Burrito Gallery and the classy Downtown Cigar Lounge.

What are the best museums in Jacksonville?

Art and history lovers will feel right at home in Jacksonville’s many museums. Jacksonville’s Museum of Contemporary Art is home to more than 800 works of art, and its storefront is worth a visit, as well. The historic Cummer Museum of Arts and Gardens is the largest fine arts museum in northeast Florida, and it’s also free to visit on Tuesdays.

Are there parks in Jacksonville?

Jacksonville can rightfully boast about having the largest urban park system in the U.S., with more than 80,000 acres of parks. This includes three national parks, seven state parks and more than 400 city parks. Some of the best parks in the city are Hanna Park down by the beach; Huguenot Memorial Park if you’re into birdwatching; Pumpkin Hill Creek Preserve if you’re looking for canoeing and horseback riding; and Timucuan Ecological and Historic Preserve, the city’s largest park.

What sports teams play in Jacksonville?

The Jacksonville Jaguars of the National Football League are the city’s only major league sports team, but that doesn’t mean sports lovers in the city are left twiddling their thumbs. Jacksonville also has several minor league teams in basketball (Giants and the Jumbo Shrimps), rugby (the Axemen), soccer (Armada FC) and even ice hockey (the Jacksonville Icemen). The University of Florida’s football team — the Dolphins — compete for the Pioneer title each year, while the athletic team North Florida Ospreys are full-fledged members of Division I.

What are the main annual events in Jacksonville?

Where to go shopping in Jacksonville?

Jacksonville has shopping destinations galore, offering residents and visitors millions of square feet of retail. Jacksonville Landing is known not just for its shops, clubs, cafes and museums, but also for hosting around 600 events each year, such as the Florida/Georgia Weekend Celebrations, TaxSlayer Bowl Celebrations, and yearly staples like July 4th, Christmas Tree Lighting, New Year’s Eve and St. Patrick’s Day. The Avenues offers 1.1 million square feet of shops and restaurants, while the St. Johns Town Center and River City Marketplace bring their own contributions to a shopping bonanza.

What are the renters’ rights in Jacksonville?

Florida state law stipulates that tenants are entitled to livable conditions. Landlords are required to meet this demand, as well as provide any needed repairs for plumbing, water, heating and so on. As a tenant, you are required to give your landlord both verbal and written notice for any complaints. Most landlords in the city are experienced and aware of their responsibilities, so you can expect a similar notice should there be any complaints on their part.

Is it hard to find rentals in Jacksonville?

Jacksonville is a college town, which means that rentals turn over quickly. There is also a seasonal demand increase, especially for single-family housing, so make sure to prospect the market in advance. However, the rental market is diverse, so you’re likely to find something that suits all budgets.