Apartments for Rent in Raleigh, NC

How much is the average rent in Raleigh, NC?

How to search for apartments for rent in Raleigh, NC?

Your perfect apartment for rent in Raleigh, NC is just a few clicks away on Point2. You can look up 1-bedroom, 2-bedroom, 3-bedroom apartments, studio apartments or any other type of rental in Raleigh, NC. Just use the filtering options available to find properties according to your needs.

How to find Raleigh, NC apartments for rent I can afford?

On Point2, you can search for apartment rentals in Raleigh, NC based on your budget. Sort all condos according to price, or get a tailored list of properties by setting the minimum and maximum monthly rates you're comfortable with. Moreover, you can use the Price Drop filter to look for any recent rent declines on the Raleigh, NC rental market.

Point2 offers a lot of information about rentals in Raleigh, NC, from property type, square footage and amenities to area demographics and even local rent trends. Additionally, you can use the map view to check if the apartments you're looking at are close to the facilities and services you need. The name and contact details of the real estate agents handling the condos are available on all listings, so just reach out to them directly through the contact forms provided.

Raleigh is the capital of North Carolina and with a population of around 474,000 people, it is also the second-largest city in the state, after Charlotte. Raleigh has been steadily growing over the past decades and it is best known for its historical attractions, culinary scene, as well as a vibrant nightlife.

What cities are close to Raleigh?

Raleigh is only 12 miles away from Cary, 25 miles southeast of Durham and 165 miles northeast of Charlotte. The city is also part of the Research Triangle, an area that encompasses Raleigh, Durham and Cary.

The city of Raleigh has a humid subtropical climate, similar to the rest of the southeastern U.S. Summers can be quite hot and rainy, while winters are mild, with the occasional sleet, snow or freezing rain. July is the hottest month of the year, with temperatures averaging around 80°F, and January is the coldest, seeing averages of 41°F. 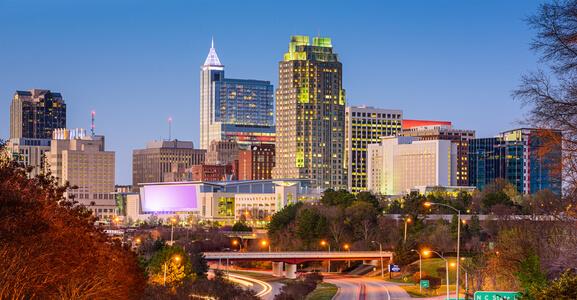 What are the pros of living in Raleigh?

In 2014, Raleigh was ranked the best city to raise a family in the U.S., according to Forbes. However, the city is very appealing to people of all ages due to its bustling downtown, exciting attractions and annual events, as well as its ethnic diversity.

What are the cons of living in Raleigh?

Like many major cities, Raleigh has a shortage of parking spaces, most of them being either metered or pay-for-park lots. Also, due to its geographic position, hurricanes are not uncommon in the area and they usually occur from August through to September. 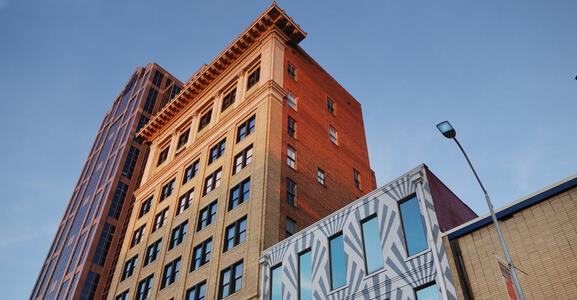 Is Raleigh an expensive city?

Although Raleigh is more expensive than nearby neighboring towns, it is cheaper than Charlotte and the living costs are on par with the national average. Groceries tend to be more expensive, yet some amenities, such as monthly utilities, are cheaper. Raleigh residents also have household incomes that are higher than the annual average across the U.S.

How much is public transportation in Raleigh?

GoRaleigh is the city's provider of public transport, operating 40 different bus routes across the city. The price of a day pass is $2.50 and a weekly pass is $12.

How much does a meal cost in Raleigh?

A three-course meal for two in one of Raleigh’s mid-range restaurants is $60, while a single meal in an inexpensive restaurant is around $13.72.

How much are utilities in Raleigh?

The average monthly utility bill for a 915 sq. ft apartment in Raleigh is $138.33 and it includes water, electricity, heating and waste disposal.

The average rent for an apartment in Raleigh is $1,522 per month.

What is the average apartment size in Raleigh?

The average apartment size in Raleigh is 957 sq. ft.

What is the rent for a studio apartment in Raleigh?

What is the rent for a 1-bedroom apartment in Raleigh?

What is the rent for a 2-bedroom apartment in Raleigh?

What is the rent for a 3-bedroom apartment in Raleigh? 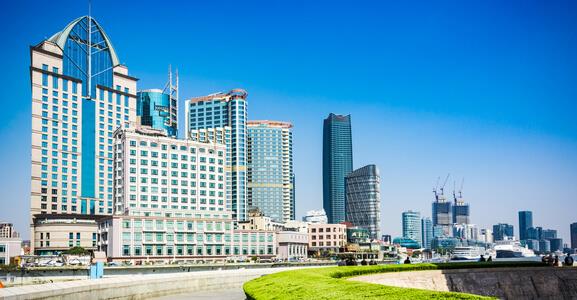 Is Raleigh a good city for work?

Raleigh is an excellent choice for those seeking employment opportunities. Its unemployment rate is only 4.6%, which is below the national average of 5.5%. In addition to this, Forbes named Raleigh the second-best city in the U.S. for business and careers in 2014, followed by the third-best city for young professionals in 2016.

What are the top employers in Raleigh?

Raleigh is home to companies such as RBC Bank, Ram Air Freight, Progress Energy and also part of BB&T, which act as some of the city’s top employers. 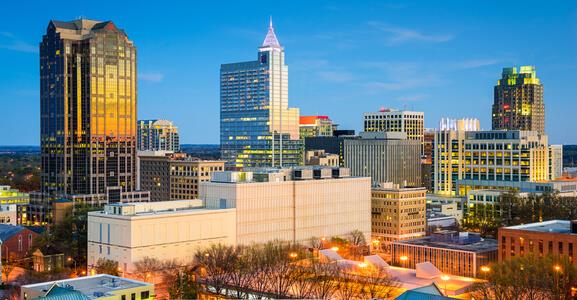 What are the top colleges in Raleigh?

Raleigh has one of the highest percentages of college graduates in the U.S., with the Wake County School District being one of the top 15 districts in the state. Some of the top colleges and universities in Raleigh include North Carolina State University, William Peace University, Wake Technical Community College and Strayer's North Raleigh Campus. 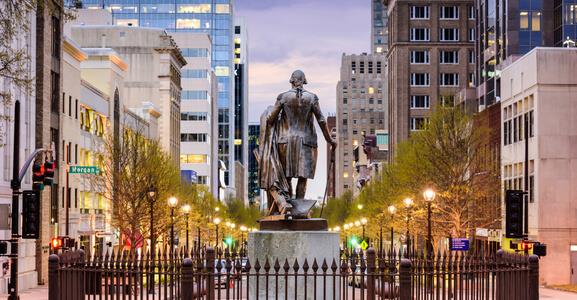 What can you do in Raleigh for free?

Raleigh offers plenty of attractions for those seeking a bargain day out. If you're into outdoor activities, check out Shelley Lake Park, which provides visitors with several kid's playgrounds, a basketball court, as well as scenic lake trails. For those with a cultural streak, the Midtown Music Beach Series at North Hills has over 1250,000 annual visitors during its 16 weeks of performances, all of which are free to enjoy.

What are the recreational attractions in Raleigh?

Nature lovers will be served a real treat in Raleigh. Durant Nature Preserve is a sprawling 230 acres park where you can enjoy hiking, mountain biking and even camping. If you're after something more adrenaline-inducing, check out DEFY Raleigh, a 20,000 sq ft warehouse-style park where you can enjoy the world-famous Angled Wall Trampolines, the Olympic Foam Pit, as well as one of the largest Trampoline Dodgeball cages in the U.S.

What are the best museums in Raleigh?

Raleigh has several museums that are worth paying a visit to. The North Carolina Art Museum has a highly popular M. C. Escher exhibit, as well as sculptures and paintings from many known artists. The displays at the Contemporary Art Museum are a must-see as well, same as the occasional live music shows with local bands that the museum hosts.

What sports teams play in Raleigh?

Raleigh has two minor league baseball teams playing in the area: the Carolina Mudcats, an Atlanta Braves affiliate and the Durham Bulls, a Chicago White Sox Affiliate. Meanwhile, basketball fans are sure to catch a game with the Duke and North Carolina, two teams who also play locally.

Where to eat in Raleigh?

The food scene in Raleigh is as diverse as its residents. For something unique, check out Bida Manda, the perfect place to enjoy traditional Laotian food without going abroad, accompanied by some of the city’s tastiest cocktails. Bahama Breeze is a popular hangout for those who enjoy Caribbean cuisine, while Centro, in the downtown area, will see you set with some Mexican treats. If you find yourself in Five Points, don’t miss out on Lilly’s Pizza, or visit Buku Global for some street food.

Where to go out in Raleigh?

One of the best spots to start your night out in Raleigh is at the Foundation, a whiskey bar that has a reputation for using only American ingredients. Craft beer lovers will be happy to learn that the city is home to several breweries, including Raleigh Brewing Company and Trophy Brewing, with a diverse beer portfolio ranging from session IPAs to pastry stouts. Cinemark Raleigh Grande and its 16-screen Cineplex is a great hub for indie and art films, as well as those looking for some food and drink on the side. Or, if you have kids with you, the Raleigh iMax is another popular choice.

Where to go shopping in Raleigh?

When it comes to shopping in Raleigh, the Crabtree Valley Mall is one of the city's finest. Spreading over 1 million sq. ft, the mall is home to over 220 stores and many restaurants, such as Fleming's Prime Steakhouse & Wine Bar, The Cheesecake Factory and McCormick & Schmick's. The Triangle Town Center is another popular shopping spot, offering visitors over 125 stores to pick from, such as Belk, Saks Fifth Avenue and Macy's. If you're after something different, don't miss out on the State Farmers Market, one of the largest and best in the U.S. Here you'll find all sorts of home-grown produce, most of which is grown locally by the students at one of the biggest agricultural schools in the U.S., the North Carolina State University.

What are the renter’s rights in Raleigh?

North Carolina state law governs renters' rights in Raleigh, which are similar to the rights renters have throughout the U.S. Apart from the southern accents and the locals' warm attitude, there's not much else renters need to be aware of when moving to Raleigh.