Apartments for Rent in Orlando, FL

How much is the average rent in Orlando, FL?

How to search for apartments for rent in Orlando, FL?

Your perfect apartment for rent in Orlando, FL is just a few clicks away on Point2. You can look up 1-bedroom, 2-bedroom, 3-bedroom apartments, studio apartments or any other type of rental in Orlando, FL. Just use the filtering options available to find properties according to your needs.

How to find Orlando, FL apartments for rent I can afford?

On Point2, you can search for apartment rentals in Orlando, FL based on your budget. Sort all condos according to price, or get a tailored list of properties by setting the minimum and maximum monthly rates you're comfortable with. Moreover, you can use the Price Drop filter to look for any recent rent declines on the Orlando, FL rental market.

Point2 offers a lot of information about rentals in Orlando, FL, from property type, square footage and amenities to area demographics and even local rent trends. Additionally, you can use the map view to check if the apartments you're looking at are close to the facilities and services you need. The name and contact details of the real estate agents handling the condos are available on all listings, so just reach out to them directly through the contact forms provided.

Nicknamed the Theme Park Capital of the World, Orlando is known across the globe as one of the biggest entertainment centers for all the family. Disney World and Universal Studios are just two leading attractions among a treasure trove of fun. Besides a plethora of amusement parks, Orlando is a world-leader in hosting conferences and conventions of all shapes and sizes. This is partly due to Orlando boasting the second-highest number of hotel rooms (behind Las Vegas) in the U.S.

Why is Orlando called The City Beautiful?

Orlando has many nicknames, but The City Beautiful is among the most well-known. The name comes from the fact that Orlando is a man-made wonder, intertwined with natural wonder, and must be experienced to be believed. This is reflected in the city’s logo, the fountain at Lake Eola.

What major cities are close to Orlando?

Situated in east-central Florida, Orlando is around 141 miles from Jacksonville, 236 miles from Miami, 438 miles from Atlanta and just 84 miles from Tampa.

How many airports does Orlando have?

Two international airports serve Orlando. Orlando Sanford Airport is just 15 miles from downtown, while the larger Orlando International Airport, the 13th busiest in the U.S. and 53rd busiest airport in the world, is only slightly further out of town.

Orlando has a semi-tropical climate, with January lows averaging out at around 60°F and average highs of around 83°F. The hurricane season runs from August through December. 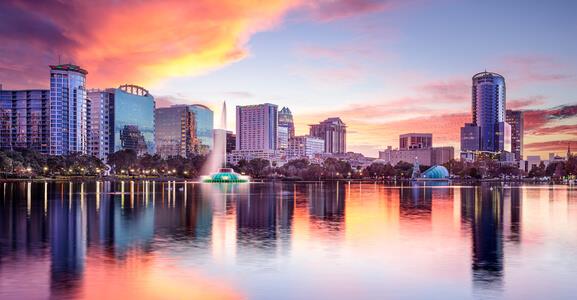 What is the average commute time in Orlando?

Even though Orlando bustles with excitement throughout the year, the average commute time is around 25 minutes, which is pretty much on par with the national average.

Who lives in Orlando?

Besides tourists, Orlando is home to a rather diverse population, which is considerably younger than other areas in Florida. Residents have an average age of around 32 years, giving the city an energetic, youthful vibe. Despite a relatively young population, approximately 38% of residents are married.

What are the pros of living in Orlando?

One of the biggest benefits of living in Orlando is the wealth of job opportunities available to residents. Obviously, the entertainment industry runs the pack, though many Fortune 500 companies also call Orlando home. Another obvious benefit is the sheer number of entertainment venues to enjoy in and around the city, such as the Kennedy Space Center at Cape Canaveral, around 50 miles to the west.

What are the cons of living in Orlando?

Unlike other major cities in Florida, Orlando is inland and doesn’t have a beach to relax on. However, stunning beaches such as Cocoa Beach, Daytona Beach, New Smyrna Beach and Canaveral National Seashore are only about an hour’s drive away for the most part. Another gripe that residents have is the traffic the city sees as tourists flock to Orlando during high-season. Besides road traffic, locals must also endure long queues at their favorite attractions, carnivals and fairs. 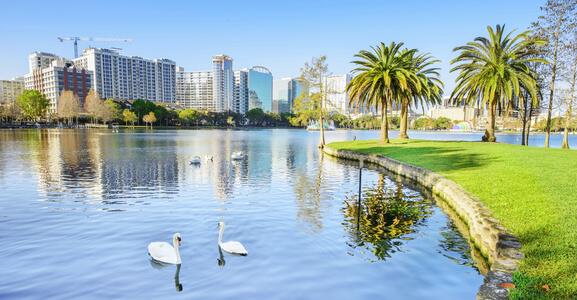 Is Orlando cheaper than Miami?

In general, the cost of living in Orlando works out to be around 16% lower than in Miami. Rent prices are almost 30% lower, and consumer prices 11.5% lower. Restaurants cost 8% less in Orlando than Miami, and a typical 3-course meal for 2 in a mid-range restaurant will be about $50 on average.

How much is public transportation in Orlando?

Public transportation in Orlando is reasonably priced, with a one-way ticket on local transport costing around $2 on average, while a monthly pass will be approximately $50.

How much are utility bills in Orlando?

On average, you can expect to pay around $160 per month for basic utilities, including heating, cooling, garbage disposal, electricity and water. This figure is based on a 915 sqft apartment.

The average rent for an apartment in Orlando is $1,937 per month.

What is the average apartment size in Orlando?

The average apartment size in Orlando is 962 sq. ft.

What is the rent for a studio apartment in Orlando?

Rent for a studio apartment in Orlando ranges between $1 and $2,873 per month.

What is the rent for a 1-bedroom apartment in Orlando?

What is the rent for a 2-bedroom apartment in Orlando?

What is the rent for a 3-bedroom apartment in Orlando? 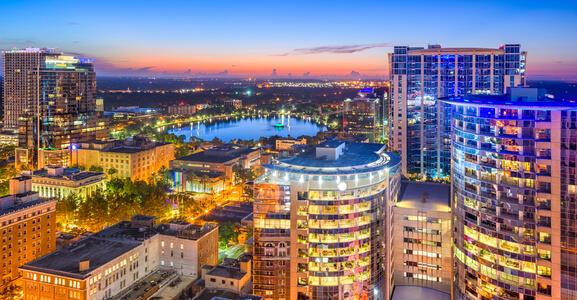 What is the unemployment rate in Orlando?

Orlando has a relatively low unemployment rate of around 2.5%, compared to a national average of about 4%. In addition, an average job growth rate of 5.5% per year ensures a secure employment market.

Who is the largest employer in Orlando?

Employing over 50,000 people, Walt Disney World is Orlando’s largest employer. Other notable names include Walmart, Universal Studios and Adventist Health System. The health care and social assistance sector is the most common industry by number of employees, and many companies hire over 12,000 employees. JP Morgan Chase and Publix Supermarkets also have a considerable presence in Orlando. 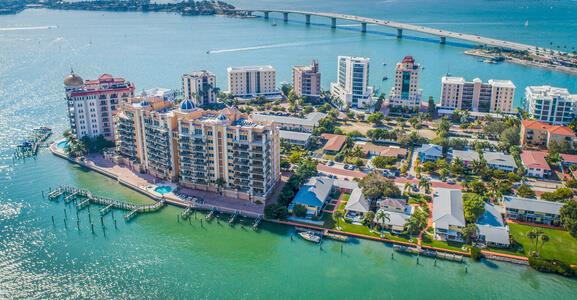 Orlando is served by Orange County Public School District (OCPS), which spends around $10,400 per student each year. The average student-teacher ratio is 17-1. Students have access to various OCPS magnet school programs, encouraging them to concentrate their studies in various fields, such as science, mathematics, language and the arts. Students with special needs can attend private schools in the city and are eligible for McKay Scholarships.

What is the largest university in Orlando?

The University of Central Florida caters to over 50,000 students and is the largest university in Orlando. However, there are many more well-regarded higher education institutions in the city, including Everest University of North/South Orlando and the International Academy of Design and Technology. Medical colleges include the Florida College of Integrative Medicine and the Florida Hospital College of Health Sciences. 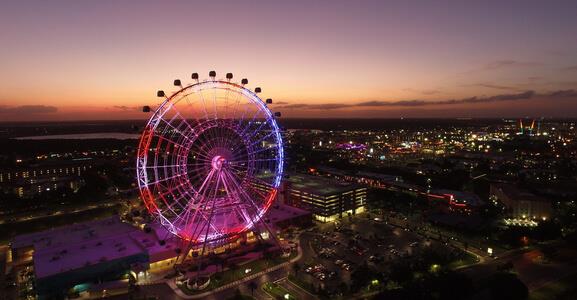 What theme parks are there in Orlando?

Orlando is home to a vast array of theme parks, including famous names like Walt Disney World, Legoland Orlando and Universal Studios Orlando. There are hundreds more, including water parks such as Aquatica Orlando, Discovery Cove, SeaWorld Orlando, CoCo Key Water Resort and family-owned parks such as Fun Spot America. Westgate Lakes Resort & Spa is another popular place for those looking to balance thrills with relaxation. Indeed, there’s so much to squeeze in, one visit is seldom enough and many visitors return time and again.

What else is there to do in Orlando besides theme parks?

While Orlando might be the theme park capital of the world, there’s tons more to do in the city. A range of challenging golf courses can be found in and around the city, and many offer fantastic tourist discounts and packages. In terms of nightlife, visitors can enjoy an array of dance clubs such as Ono Nightclub, the Beacham and The Groove, all of which attract locals and visitors alike. For an educational but fun-filled day out, the Orlando Science Center is a must. For a taste of the carnival, Electric Daisy Carnival features thrilling carnival rides as well as electronic dance performers. Finally, be sure to take in the view from the 400-foot tall Orlando Eye Ferris Wheel.

What live shows are there in Orlando?

Some of the most popular live shows in Orlando include the iconic Blue Man Group at the Universal Orlando Resort and the mesmerizing Cirque du Soleil shows.

Where to eat in Orlando?

Visitors and residents are spoilt for choice when it comes to eating out in Orlando. One of the most famous venues is Hard Rock Orlando, where you can try the Legendary Burger before enjoying a gig at the 3,000 person concert venue. Universal CityWalk is another popular pick and is great for family visits. Cuisines from around the world can be enjoyed in the city, with Mexican being showcased at Agave Azul, Japanese sushi at Benihana and Brazillian Steakhouse options at Texas de Brazil. The Cheesecake Factory is a popular spot for something sweet.

What sports teams play in Orlando?

Sports fans have plenty to enjoy in Orlando, with teams in various leagues. In the NBA, you have Orlando Magic, for soccer, there’s MLS Orlando City Soccer Club, while the Orlando Predators provide thrills for indoor/arena football fans. Additionally, the ECHL’S Orlando Solar Bears hit the ice at the Amway Center, providing some cool relief for hockey fans.

What are the main annual events in Orlando?

Stunning events can be enjoyed throughout the year in Orlando, though Spring is the busiest season. Enjoy the Florida Film Festival, the Great Orlando Mixer, the Florida Music Festival and Fiesta in the Park to get things started. For lovers of theater, the Orlando International Fringe Theatre Festival is a global phenomenon.

Where to go shopping in Orlando?

With plenty of shopping venues, you can certainly shop till you drop in Orlando. An array of upscale and discount outlets alike can be found throughout the city. High-end options include Orlando International Premium Outlet and Orlando Vineland Premium Outlet. The city is also home to numerous elaborate malls, each offering a wealth of shopping, dining and entertainment options. The Florida Mall and the Mall at Millenia are among the most popular.

What are the renters’ rights in Orlando?

Renters in Orlando are well-protected throughout the rental process, from signing the agreement to moving out. It’s illegal for landlords to discriminate against tenants on any grounds in Orlando, ensuring everyone has the right to rent. It’s also illegal for landlords to penalize tenants who have notified them of flawed conditions in their unit. As such, landlords cannot increase rent, lock tenants out of units or shut off utilities without good reason, prior notice and the tenant’s consent. Breaching these terms can lead to severe charges and penalties for the landlord, such as reimbursing their tenant 3-month’s rent.

How long do you have to register a car in Florida?

New residents in Orlando must register their cars in Florida within 10-days of starting work if they’ve relocated from out of state. They must provide proof of ownership and the VIN (vehicle identification number) of their vehicle and are also required to purchase Florida-based insurance. Registration is quick and easy and can be completed at any DMV office in the state.