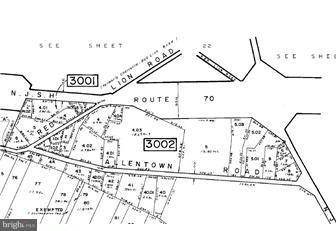 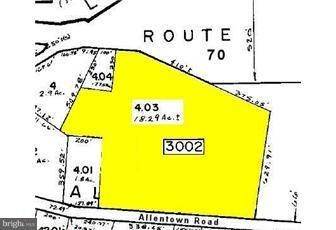 $160,000 USD
Open House
No open houses are scheduled at this time.
Private Tour
Select date and request your own property tour:
Print Original Listing
Is this home right up your alley? Get all the details now.

This is a very rare opportunity to own 1824 Route 70, Southampton New Jersey which is 18.29 acres. Currently, it is undeveloped and wooded. It has approximately 15 acres of wetlands. We do have the Engineering Wetlands Study...which is online to view. The land is located right before the Red Lion Circle. The parcel borders Route 70 and Allentown roads, and, has been primed for development. The property could be used for either Commercial, or Residential, or simply Land use. The buyer would have to go through the process to determine just what. The property was purchased a few years ago, and the developer was going forth to obtain all the approvals for the subdivision of two residential lots and one commercial as stated earlier. The developer was starting to work with the Pinelands Commission for any conditional waivers & approvals, because of wetlands. ...but, once again, simply didn't happen, he decided to concentrate on his North Jersey businesses. It is strategically located on Route 70 West...... close proximity to various restaurants, retailers & businesses, including the High End Promenade at Sagemore Shopping center. Additionally, ....Minutes from upscale shopping and major interstate connections. It's accessible by I-295, & Routes 38, 206, 73, 70, PA & NJ Turnpikes, & the Atlantic City Expressway and, .... close proximity to center Philadelphia & Shore points. Within close vicinity and minutes away from the Cherry Hill & Moorestown Malls, the Market Place at Garden State, and Centerton Square/Moorestown. It's approximately 30 minutes to center Philadelphia, about an hour’s drive to the Jersey Beaches, and less than 2 hours to New York City, not to mention that it's centrally located in the Tri State area. A short drive to the Ben Franklin, Walt Whitman, Tacony-Palmyra Bridges or Burlington/Bristol Bridge connecting with I-95 & Bucks County. Easily accessible to the Philadelphia International Airport and Atlantic City's Int'l Airport. Close to first class medical facilities such as University of Penn Jefferson, Fox Chase, Cooper, etc.
Find out more about this property. Request details here
View MoreView Less
Listing provided by TREND
Copyright © 2022 Bright MLS. All rights reserved. All information provided by the listing agent/broker is deemed reliable but is not guaranteed and should be independently verified.

Latest sale prices and tax info are provided by PropertyShark, from public records.

Similar properties for sale in Southampton

Browse all homes for sale in Southampton 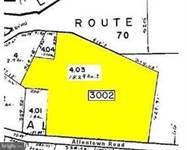 More about this property: